Here are our new cinema logos.

First off, a flatliner is our word for vampire since they have no pulse and read as a person that flatlined. The idea behind vampires here is a very unconventional one. Our first book, Daybreak: Flatlined, explains how vampires began. 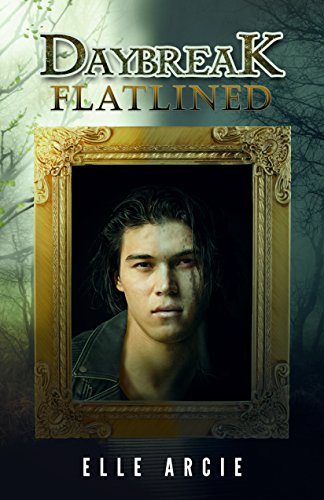 A long time ago there were angels cast to earth that had children with human women producing what is known as the Nephilim. The conspiracy is that by polluting the human bloodline with angelic blood early on, Jesus would not be born as purely human. So, the flood of Noah washed nearly everyone with angelic blood away and the fallen angels were imprisoned in Hell by a squad of heavenly angels.

During their mission, one angel in particular, was unlawfully detained. Primus was rescued by Gabriel. But only after Primus made a deal with the devil to keep human souls out of the torture of Hell by giving them immortality. The catch of course is that they must become murderous vampires.

God being merciful gave vampires a way out, just like He did with Lot and the cities of Sodom and Gomorrah. If 3 vampires abstain from blood then all of them can have their humanity back.

In Epic Undead Season One we see what was going on in the rest of the flatliner world while Paul worked on claiming his humanity, keeping his girlfriend alive, and joining the living immortals trying to defeat his boss (in Daybreak: Flatlined).

Here we see how everyone’s friend, Elle, winds up entangled in their mess. Troy bites his ex wife and goes on the run. Hiding at Elle’s house put a target on her back. She winds up searching for her (thought to be dead) husband in Hell and ultimately joins the immortals in the Tibetan Mountains in search of archangel Rafael’s camp at the Jade Gates.

Elsewhere in the world, Danny fights to maintain the secret of being turned into a vampire on his first day of school. Almost making it to graduation, he defies the odd to not end up causing an undead takeover. Or does he?

His younger brother Zach enrolls at the same school determined to find a way to save their father from the vampires that kidnapped him years ago. Being that this is a school of wizardry they both hone their skills and stumble into the clash of the century that unleashes the Trifold. An ancient creature that threatens the safety of the entire school.

Stay tuned as chaos ensues. Join our race against time as this thrilling ride leads all of our characters to the last days before the apocalypse.

We have Author Features regularly and Member Tribute videos to thank our followers for going on our journey of love, danger, and a non-stop suspenseful whirlwind for all of our chronicles.

And then you said... Cancel reply

Season One on Amazon and Audible

A Walk In Our Garden

Hi There, Elle here. I hope you enjoy the drama unfolding in the lives of our undead and sometimes live immortals as they journey towards the apocalypse and reflect on the ages they've lived through. It's always true to life & outlandishly entertaining. And Chaos Ensued!